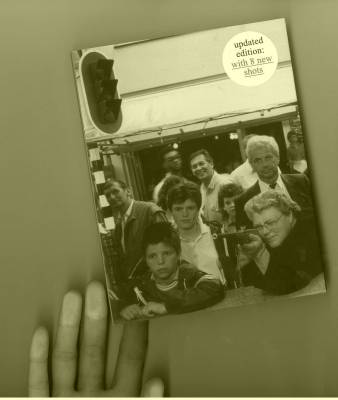 IN ALMOST EVERY PICTURE 7 - UPDATED EDITION

Thanks to Ria van Dijk.

For 80 years Ria has been bang on target. To mark this impressive milestone ‘in almost every picture #7’ is being re-released this year in the form of a special anniversary edition with eight new shots and an exhibition in Tilburg.

Ria van Dijk shot her first photo at the Tilburg fair in 1936 when she was 16 years old. It started at in Ria’s hometown of Tilburg, but throughout the years she followed the fair from town to town. It became a tradition and Ria continued shooting (guns and photos) year after year. And the bullseye is that Ria kept every single photo as if they were her trophies.

In 2008 Erik Kessels and Joep Eijkens collected Ria's photographs in the book 'in almost every picture #7’.  In 2016 Ria returned to the fair and shot on July 22nd her 80th photo at the opening of the Tilburgse Kermis. For the occasion, KesselsKramer and City Marketing Tilburg published this celebratory updated edition of In almost every picture #7.